We are truly honored to receive this kind invitation to write a kennel visit. I have loved animals all my life. My brother and I kept many animals when we were children: fish, reptiles, rabbits, cats, amphibians, ferrets – everything creeping, crawling or walking – except a dog. My Mom was the best sport in the neighborhood about our animal passion. The neighboring Moms would call her and beg her to quit letting us have lizards and snakes because she was setting a difficult precedent for them. She would tell them that as long as we took good care of our animals and earned our own money to buy and feed them, she would not deny our hobby. However, she drew the line at a dog. Every time we visited our local pet store, we would look longingly at the Pom book on the rack and wish for one of these beautiful little dogs. Although we snuck several puppies home over the years, we were never allowed to keep one.

You may be asking yourself why a Mother would allow lizards but no dog? Actually, she had a very good reason for denying our wish. While my Dad was finishing law school, we lived in a small trailer house in another family’s back yard. My Mom was expecting her third child and we had gone away to spend the summer with my Grandparents. When we returned home, every table scrap fed dog in the neighborhood had used our back yard for their potty place. My pregnant Mom cleaned up two garbage bags of nasty smelling dog poop, and from that moment on the very sight of a dog made her stomach turn. (Happily, she later changed her tune and has owned several Avalon Poms herself over the years.) Anyway, we still laugh that my Mom drove me to be a Pom nut because I was dog deprived as a child. My husband, Eric, grew up on the small Hawaiian Island of Molokai and then the small farming town of Downey, Idaho. He is a kindred animal lover also, having kept many animals throughout his childhood, and has always been supportive of my Pom passion.

Eric and I started dating when we were teenagers. He was attending the University of Utah and we met at church when he was home for a visit. When I graduated from High School, I went away to attend college in Los Angeles and Eric left to Switzerland for 2 years to serve a mission for our church. We wrote to each other every week while he was away and married the summer he returned. We have five wonderful children. We both work for Time Laboratories, a family business founded in 1973 by my Grandmother, Annemarie Buhler. She was instrumental in developing the first true time release process for vitamins and minerals and was one of the first to bring Aromatherapy Essential Oils to this country. My study in nutrition, Aromatherapy, and holistic health care has been very helpful in raising toy dogs.

Not long after we graduated from apartment to tiny condo, the old itch to have a Pomeranian returned. I would see our neighbor walking his little black Pom each day and long to have one. We finally saved up enough money and not knowing any better, went searching the local newspaper for a dog. I also bought a copy of the classic book The New Pomeranian by Sari Brewster Tietjen and read it from cover to cover at least a dozen times. We located a breeder in Los Angeles who was in the process of retiring, and purchased a cream female named Mandy and a little orange male named Kiki from her. The next weekend we were trying to decide on a kennel name and passed Avalon Island on the way home from the beach. The name stuck out to me because I always liked it from the King Arthur legends. We never really cared for the big city life, so after our first son was born, we decided to move back to our home state of Idaho. My parents own some mountain acreage and they gave us land where we could build our house. My Mom and Dad live just up the hill from us and have been a great help with our Poms.

From the beginning, we wanted to breed the best quality dogs possible. We attended a dog show in Utah hoping to make some contacts to obtain a couple of new puppies. Realizing that the Poms we had originally purchased were not show quality, we decided to place them into pet homes and search for show quality breeding stock.

We met the late Audene French from Utah and obtained two dogs of her breeding, a nice older male named Dandee, who was from Scotia and Bonner lines, and a young black and tan female named Kali. We wanted to find a male that we could show, so we persisted in our quest. We obtained some back issues of the Pom Review and these were an invaluable help. I began to study pedigrees and get an idea of the type of Pom that I wanted to produce in our breeding program. Ch. Starfire’s I’m Too Sexy was among the top winning Poms at the time, and I fell in love with his type. I called several breeders with friendly looking ads, but there was nothing available. I noticed that Veronica Boudreau of Prism Poms, FL was working with the lines that I liked. We chatted on the phone over the period of a couple of months and got to be friends. She decided to offer me a little cream female named Chloe, out of Ch. Starfire’s Rock-N-Rolling. I was also fortunate to obtain several nice dogs from Ken Griffith of Lenette Poms. I greatly admire Ken’s humble sincerity, honesty, and willingness to help newcomers. Nearly all of our dogs go back to Lenette/Great Elms. I am so very grateful for Ken, his friendship over the years, and for the mark his dogs have left on our breeding program.

I started looking for a good stud to use and noticed Ch. Starfire’s Armani who was being shown on the West Coast. I was nervous to call his owner, Mrs. Julie Moreno, because I knew that she was a long time Pom breeder and toy judge. I was sure that like some others I had contacted, that she wouldn’t give me the time of day. Finally I got up the nerve and phoned her. To my delight she was friendly and extremely helpful from the first phone call. We became fast friends, and communicated by fax or phone often – sometimes even in the middle of the night as she helped me save a litter that was in trouble. I sent her pedigrees and photos of all of my dogs and she studied them for me and helped me form a breeding plan. Julie was having some health problems so I helped her with that, and she became my mentor in Poms. We planned that I would send several of my girls to her for breeding. Julie thought it out carefully and decided that since she was down to just one female who had turned out too small to breed, Armani would be of more use with me. Armani came to Avalon and became one of our foundation studs. I was so excited that I could hardly breathe. Armani was a beautiful mover with a lovely coat, extremely sound legs, and a nice high ear set. He readily passed these traits onto his puppies. Am/Can Ch. Moreno’s Perri Winkle joined the Avalon team about a year later. Perri was specialed 1992-1993 and was the number 3 Pom in the USA, 1993 and in the top twenty in all toy systems. Julie nudged me to become involved with the American Pomeranian Club early on and I have been pleased to serve the club in various capacities over the years as Membership Chairman, Board Member and column writer for the Pomeranian Review. I will always be grateful to Julie Moreno, our dear friend, and late Pom partner.

In the mean time, Ruby Poole kindly let us have one of her Ch. Great Elms Prince Charming II daughters, Ruby’s Charming Alanda Okla. To date, Prince Charming is the only Pom to have won Best In Show at the prestigious Westminster Dog Show. I was thrilled to have one of his daughters as a foundation for my breeding program. I really wanted to have a terrific male from Landy that I could use with Armani and Perri’s daughters. I again began the search for that perfect match. Veronica suggested that I might want to use Ch. Starfire’s Nicolas el Grande because he had a lot of old Great Elms behind him which would be compatible with Landy. Tony kindly allowed me to breed Landy to Nicolas. Landy whelped three puppies, one of which turned out to be our first home bred Ch. Avalon’s Valentino Starfire. Tino was everything we had wished for – sound, sweet natured, and with that lovely baby face I adore.

In 1996, we decided that our Pom family had definitely outgrown our house. We decided to build an addition onto our house just for the doggies. I wanted our dogs to be raised in a home type environment so we began plans on what Julie Moreno lovingly named our “doggie condo.” It took every spare minute of our time for an entire summer to build. The building is concrete block construction, 30 feet long by 15 feet wide. The blocks are filled with styrofoam beads for superior “ice box” type insulation. One thousand feet of water pipe embedded in the concrete floor provides efficient hydro heating and cooling. The inside is finished with 10 individual runs which lead to individual outdoor exercise areas. The biggest benefit to each dog having its own doggie door is the ease in house training for the new owners. Weather permitting, our Pom Moms teach their puppies how to use the doggie doors to go potty outside. In winter, we train to pee pee pads.

We decided many years ago that we did not have the time to do everything. We have relied on wonderful handlers to show our dogs including Celeste Flournoy, Jackie Rayner, Jane Lehtinen, Cathy & LeeAmber Jessen, Tim Reese, Randy Winters, and the late Don Walker. We would like to thank the handlers who have made it possible for our dogs to be shown and have the public exposure that we do not have time to give them.

While I still love the classic orange and red color Poms, I have always adored beautiful whites and creams. For the last few years, we have been seeking typey, whites and creams to add to our breeding program – a difficult task at best. We were fortunate to obtain some nice dogs out of Ken’s lovely cream Ch. You Got The Spirit of Lenette. Mr. David Hogg kindly allowed us to use his beautiful white boy, Dia’s Snow Dragon, and we recently imported a lovely little white male from Frank Hsieh of the prestigious Asia kennel, Chiao Li Ya. We are excited to continue the quest of producing beautiful cream and white Poms along with our oranges and reds.

Breeding Poms can exhausting and heartbreaking at times, but also extremely rewarding. I could not do it without the help and support of my wonderful husband and children who have been such a help socializing puppies, playing with the adults, and helping to train the show puppies. For all that they do, and for all of the others who have helped to make our breeding program a success, I extend our heartfelt gratitude. Thank you so much to Celeste and the Pom Review for allowing us to share this time with you.

In memory of our “PARTNERSHIP OF EXCELLENCE” 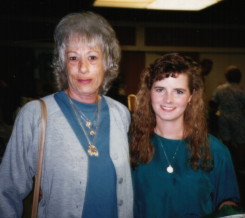 Julie Moreno and Annette at the the Washington State Summer Pomeranian Specialty, August 1996